That year‘s Annual IHE Survey conducted by HIMSS indicated that most respondents believed that medical devices should be given a priority for inclusion in the IHE.  Medical devices held the potential to posed potential connectivity numbers that would quadruple the number of IT devices. Medical devices were rapidly becoming “smarter,” and manufacturers were moving to establish proprietary networking protocols.  The time was right for the PCD Domain. 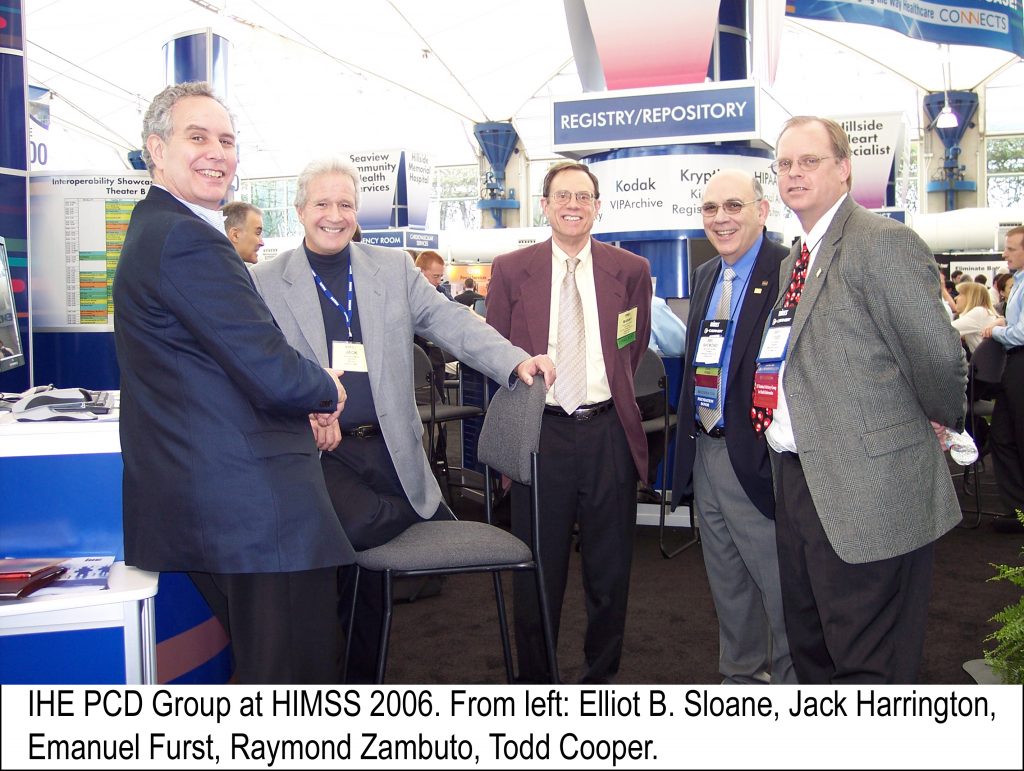 Twenty-three clinical engineers from the United States, Canada, and Mexico responded to the initial ACCE call for participation in the new domain.  The official launch meeting of the PCD domain in September, 2005, in Washington D.C. was attended by over 60 participants from industry, health care systems, government, and professional societies, as well as delegates from Canada and Europe.  Primary goals of the meeting were to define the scope of the domain, to set the domain structure into place, to identify the value propositions of the stakeholders, and to explore the process of using Use Cases to build models for interoperability.

The scope of PCD was to span virtually all clinical disciplines, including emergency medicine, anesthesia, intensive care, surgery, OB/GYN, IV Therapy, and others. The long-term goal established for PCD is to facilitate the integration of physiologic data from patients, including measurements, diagnostic test results, and waveforms into the EHR, for application in automated charting, analysis, medical error prevention, etc.  PCD profiles also  enable integration of important process-related data, such as patient and device location, drug infusion billing, available-bed notifications for resource management, and medical device recall/update management.

PCD profiles account for some unique aspects of medical device use not found in other IHE domains such as Radiology and Cardiology.  For example:

To accomplish its objectives, PCD was organized under two primary committees, (Planning and Technical), directed by a leadership team of co-chairs.  The planning committee, co-chaired by Todd Cooper of Breakthrough Solutions and Ray Zambuto of Technology in Medicine, would be responsible for high level planning, surveying the industry, and developing a 5-year roadmap for the domain.  The Technical Committee, co-chaired by Cooper and Jack Harrington of Philips Medical Systems, would be responsible for taking the use cases of the Planning Committee and translating these into working documents which the vendors can use in designing IHE compliant systems.  The initial leadership team also included Elliot Sloane, PhD of Villanova University, serving as the liaison to the SDC and Emanuel (Manny) Furst, PhD of Imptech Improvement Technologies who served as Technical Coordinator for the domain.

The initial goal of PCD was to develop Profiles from the Use Cases for communicating asynchronous data, such as vital signs or point-of-care laboratory test results, to the HER, and for binding a reliable patient identifier to the device/data.

Over the last 10 years, the progress of PCD has been remarkable.  According to Paul Sherman, of Sherman Engineering, the Technical Coordinator since 2014, 30 vendors participated in the 2018 PCD Connectathon.  One hundred thirty-eight (138) products and systems were tested for interoperability under one or more PCD Profiles. Over fifty (50) products and systems, which have passed IHE Connectathons for PCD Profiles are now commercially available.

The 2019 PCD Planning Committee chairs are Rob Wilder of SPOK and Kurt Eliason of Smiths Medical and Technical Committee chairs are John Rhodes of Philips and Tom Kowalczyk of B Braun.  They preside over a development platform that now numbers 16 Workgroups. Currently, there are 12 PCD Profiles completed or under development. Three of these profiles have had the highest impact in terms of adoption and implementation potential: DEC, ACM, and PIV.

The power of these and other PCD profiles have been significantly enhanced by the development of two significant “tool sets,” the Rosetta Terminology Mapping (RTM) and the NIST Testing Tools.

Rosetta Terminology Mapping (RTM) is the primary mechanism to ‘translate’ clinical terms, such as LOINC (used in the US) into internationally recognized standards, specifically ISO/IEEE 11073-10101 nomenclature terms.  While medical equipment manufacturers must comply with international standards for trade and liability, there was no cross reference for the terminology, units of measure, or trade names.

The importance of this was recognized as early as 2007 by Paul Schluter of G.E. Healthcare.  Working with his PCD peers, he began to construct a “Rosetta Stone” for clinical parameters by cross-mapping existing patient information.  RTM has grown to now provide a library for new terms and the mechanism to use those terms until they can be incorporated into the international standards.  Currently, most physiologic events are mapped as well as over 800 technical terms.

Another significant boost to PCD that began in the early years is its relationship with The National Institute of Science and Technology (NIST).  John Garguilo at NIST initiated the relationship. He has led the NIST support team as active members of several workgroups, contributing valuable expertise.  They designed and host the PCD testing tools used to verify that messages sent can be understood by receiving systems. These tools are used at the Connectathon for formal testing but are available year-round for vendors to test their work and troubleshoot challenges before formal testing.

Looking ahead, PCD expects high impact Profiles to emerge in the areas of medical equipment management, ventilator and dialysis management, and real-time waveforms.

As PCD continues to mature, more manufacturers are incorporating its profiles in their designs.  Utilizing IHE based equipment at the hospital will improve patient safety and reduce long term costs.  As more profiles are released, it becomes possible to leverage their power in combination to solve complex problems and improve overall performance.  For example, smarter alarm systems can be built using information from multiple sources. Equipment-patient-physician associations can track care and improve billing.  In a case study reported in 2018, McLaren Healthcare System working with their Real Time Location Services (RTLS) partner and their infusion pump vendor to reduce pump costs, utilized key IHE and PCD profiles.  They devised a method to determine IV pump locations, and their utilization by location. In the first year, McLaren was able to re-deploy under-used pumps, reducing the need to purchase pumps and saving over one million dollars above the RTLS purchase cost.

With all that has been accomplished, PCD is still only scratching the surface of what it will eventually achieve.  The key to its long-term success is found in its Vision Statement, which is as relevant today as it was in 2005. The IHE Patient Care Device Domain (IHE PCD) is the nexus for vendors and providers to jointly define and demonstrate unambiguous interoperability specifications, called profiles, which are based on industry standards, and which can be brought to market.

Further information about IHE-PCD can be found on the PCD website https://www.ihe.net/ihe_domains/patient_care_devices/ and the 2017 Webinar Series, “Inside IHE: Patient Care Device” presented by Monroe Pattillo of Practical Health Interoperability, LLC, which can be viewed at https://www.ihe.net/wp-content/uploads/uploadedFiles/Documents/PCD/Inside-IHE-PCD-2017-slides.pdf.

Learn more about IHE and current activity by subscribing to IHE News: